The ever-escalating campus wars on conservatives

“F*** fracking!” proclaimed one perturbed student as he stole a pro-fracking sign, crumpled it and threw it in the garbage. “You should be ashamed of yourselves,” was what a Temple U professor shouted at activists. While CFACT presented students at Temple University in Philadelphia, Pennsylvania with facts, radical liberals fought back with theft and profanity. At Portland State University, CFACT filmed numerous students and faculty members who advocated for the jailing of conservatives who were skeptical of global warming.

In Washington D.C., a student working with CFACT from George Washington University infiltrated the People’s Climate March planning meeting, and he uncovered threats of violence by one of the main speakers that night. His speech was met with applause from the audience.

And just recently at the University of Georgia, CFACT Southern Regional Director Graham Beduze was stopped from reaching out to student on campus about the errors of global warming alarmism by the school administration because he was not in their “free speech zone.” When he explained to the administration that it was thunderstorming and all of the free speech zones were outside, they didn’t budge. 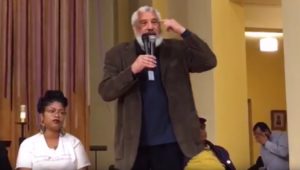 These all took place during the school year of 2016-17. It is clear that the left, whether through lone activists or systemic use of campus administrations, is doing everything they can to attack conservative students and groups to prevent their ideas form being heard.

Why does someone resort to violence or unfair rules? Because they are scared. The left knows they are losing, and they are flailing to regain the control they had over students’ minds and the country’s government.

That’s why the students we work with say they are regularly being referred to as “fascists” in place of “conservatives.” Because the “tolerant” left, is nothing but intolerant if you don’t agree with them.

Will the campus greens, liberals, socialists, and their other leftist allies realize that they are undermining any support they have from independents in this country? Or will they continue their swift march towards extremism, violence, and being irrelevant?