Recently, Lord Christopher Monckton, Third Viscount Monckton of Brenchley sold out a lecture hall at the University of Syracuse! Lord Monckton highlighted the truth behind the headlines in relation to the so-called “global warming” movement. Specifically, the Lord discussed that according to current data, the Earth’s temperature may vary by only one degree celsius over the course of the next century to to the activity of mankind on earth. This, he highlights is completely insignificant and definitely not worth wasting billions, perhaps even trillions of dollars over!

“People are starving. They need electricity to keep warm, cook, and for health reasons. To adopt policies that will make energy more expensive, especially for people in third world nations is a preposterous idea! Yet that’s exactly what the ‘greens’ want to do. It’s ridiculous!” stated James Ward, a CFACT representative at the University of Syracuse.

“All in all the event went great!” stated Jeff Omry, another CFACT representative on campus. “We had a huge turnout and everyone learned the truth about Al Gore and the so-called “global warming” activists -they are full of hot air!” 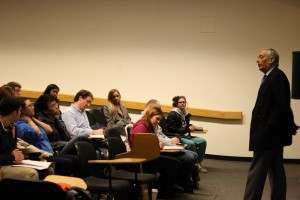